Live Music
G Play trailer
Back To What's On
8:15 pm 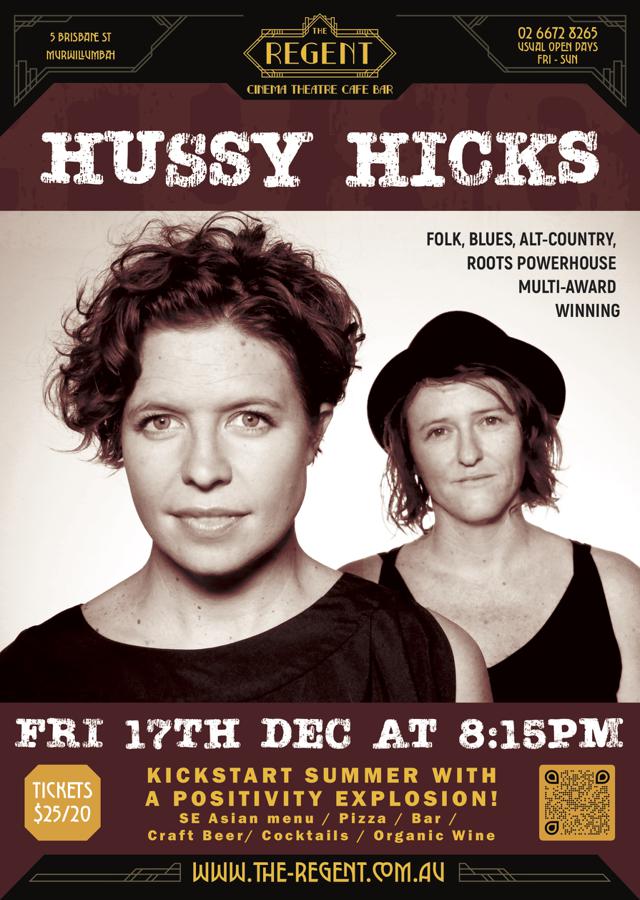 Hussy Hicks are a much loved tour de force featuring Leesa Gentz on powerhouse soul vocals and Julz Parker's acclaimed guitar skills. The magic between these two performers is legendary, and a burst of joy to the heart. They are performing at The Regent on Friday December 3rd from 8.15pm to help kickstart summer with a positive bang! Hussy Hicks have honed their sonic dexterity over the past 12 years with five studio albums, multiple industry awards, 15 plus international tours and more than 1,000 live shows under their belts. Known for their emotive, energetic live shows and passionate instrumentation, Hussy Hicks have won the Gold Coast Artist of the Year and Album of the Year awards, a Queensland Music Award, multi Golden Guitar nominations, and guitarist Julz Parker is touted by Phil Emmanuel as being 'Australia's top female guitar player' and she was voted fifth in Bluesfest's Guitar Hero fan poll, among Santana and BB King! Hussy Hicks are proving positive social change is happening at every show, foreseeing a future without sexism, racism, homophobia and xenophobia, but most importantly, without fear – a positive explosion of good sounds and vibes. Catch them on the big stage in The Regent's gorgeous auditorium. Enjoy Khanthaly's Kitchen SE Asian menu, pizzas and a licensed bar, including Frozen Margaritas! (Andrea Soler performs on The Balcony from 6pm – so come early for dinner.)